And so into the first box we dive – The July theme – Magic in the City – was a bit hit or miss for me. Mostly miss, if I’m honest. I’ve said before that I really appreciate when these boxes contain a lot of really practical items and sadly it just wasn’t the case for this box. 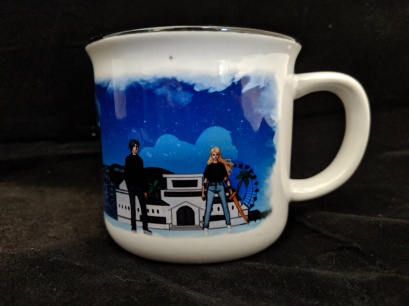 First up, we have the first mug in the promised series we will be getting. While it’s well made and the idea is great, sadly I just really hate the Mortal Instruments series and so just couldn’t get excited about it. I’ll be passing this one on to someone who will appreciate it more. We also have a Princess of Disi candle, inspired by A Curse so Dark and Lonely. I love this little candle and the art of Harper is just beautiful.

Our next grouping is a little pink-purple-blue themed! Here we have a Percy Jackson inspired pin flag, complete with a watercolour Blackjack and NYC skyline. Though I received a similar (if less pretty) pin flag last year, I have a whole lot of pins and it’s great to have somewhere else for them to go. The flag is made of canvas and it has a silky string attached to the crossbar. Mine comes off the crossbar a bit on the left hand side, but it’s more annoying than broken.

Next up we have the Wicked Fox embroidered….something? It looks like an embroidered patch similar to the Raven Boys one from a previous box, except the underside has little non-slip bumps. Yep, this is a desk coaster. Who knew such a thing existed? It’s fine by me though – since discovering the elixir that is T2’s Rum Butter Crumb Tea, I need somewhere safe to settle my ever present tea cup. The kitsune design is a little Anime-by-way-of-Nancy-Drew but it’s pretty cute overall.

“When in doubt, bravado. Always bravado.”

– Melissa Grey, A Girl at Midnight.

And that shiny pink thing? I suspect this is what caused the hold up for this box. This is a little YA Lit inspired fortune cookie. I immediately ate it upon receiving it (LOVE ME A FORTUNE COOKIE) and disregarded the S.J.M quote within. This cookie had a lifespan of approx. 0.5 second and didn’t impart any particulally wise words. Solid Meh.

And now we have the Papercrafts. I mean not really but that sounds better than Two Tarot Cards and a Necklace. The Moon is of course our favourite silver haired Ravenclaw, Luna Lovegood, and I can only assume that is Ronald Billius Weasley as The Sun. I don’t know anything about Tarot but I assume that is correct? The Diagon Alley necklace is cute but on the cheap side. It depicts a dragon atop Gringots bank and the Weasleys’ Wizard Wheezes store.

And our Showstopper for this box – drum roll please:

Check out this beautiful Pink! sprayed AND signed edition of Wicked Fox by Kat Cho! This is one I’ve heard rave reviews about and I cannot wait to get stuck into. I must confess I’ve never actually read a book set in Korea before so I’m keen to dive in.

So that’s the July box. Of everything in the box, I’ll probably only get use out of the coaster and the book and considering the two big draws of the box are things that a) didn’t last long or b) I didn’t want, I wouldn’t consider it one of my favourites. When it first arrived I was really disappointed. I understand that not every box will have me going !!!! as I open it, and that no matter how much it feels like it these boxes aren’t specifically catered to me.

And now the disappointment is out of the way, we can make room for one of my all time favourite boxes!

Our theme for this box is Nothing is as it Seems. I’m not entirely clear as to how this relates to any of the items but I loved it none the less! This box was packed to the brim with such beautiful and practical things that I fell in love instantly.

Do my eyes deceive me or are those some super cute fantasy themed scrunchies? These gorgeous and seemingly hand-made scrunchies come in blue with keys, red with bows and green with swords and I absolutely love them. I wore scrunchies waaay longer than it was cool at school and I’m so glad they’re en vogue again. These in particular are a lot of fun! 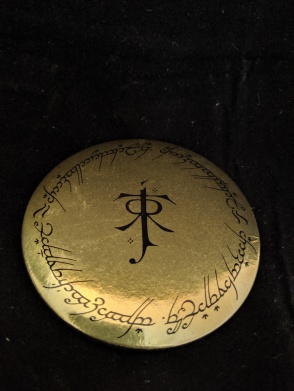 It wouldn’t be a recent Fairyloot box without a delightfully scented candle. The Thomas Cresswell inspired Chocolate-Coffee abomination is beautiful in everything but smell, but that is entirely subjective. I’ve always taken issue with chocolate scented things that aren’t chocolate so it was never going to win with me. Regardless, it’s a beautiful little thing and I’m glad to add it to my collection.

And what’s this? Another unidentifiable round object with an unexpected backing? This time we have a Lord of the Rings inspired hand mirror. I wasn’t able to get a photo of it because mirror, but rest assured that the mirror functions as expected. I am a little concerned that the mirror on the back doesn’t have any protection from the elements and may meet it’s demise in Mount Doom (AKA My handbag) but I suppose we’ll see how it fares. 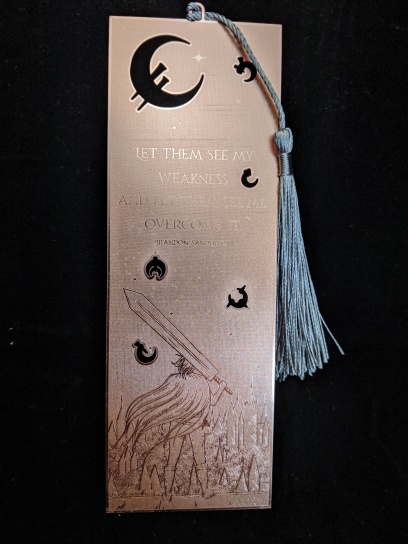 Next up we have a Brandon Sanderson inspired book mark. The photo’s didn’t really capture it but it’s a beautiful rose gold colour with a silvery tassel. It’s feels really well made and is absolutely beautiful. The stamped quote reads:

This An Ember in the Ashes inspired pillowcase is one of the more forgettable items in this box, but still really pretty!

You will burn for you are an ember in the ashes. 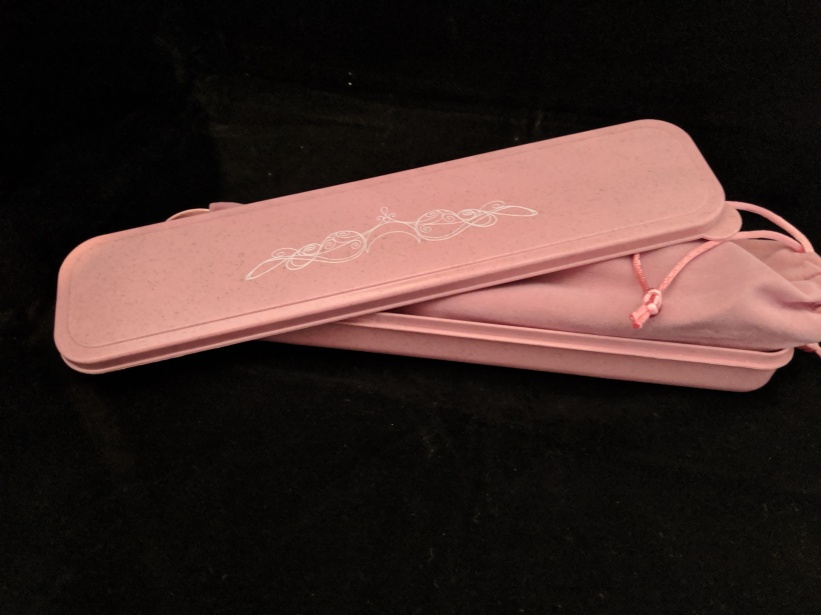 Ok, I maybe got a bit over excited when I found this box within the box. Based on the size I knew exactly what it was – a book-ish themed cutlery set! But how? And why? As someone who carries a set around at all times, I was very, very excited. And with good reason.

OH MY GOODNESS! Yes this is an oil slick The Lunar Chronicles inspired cutlery set! We have a set of moon engraved chopsticks and spoon and fork engraved with quotes from the series:

“Mirrors have an uncanny way of telling the truth”

This is exactly the sort thing I love to see in these boxes. Pretty things are all well and good, but practical pretty things are even better. Or maybe I’m just a boring adult. Either way…

Our second to last collection of items are our Papercrafts for this box. Here we have our customary Tarot depicting Harry as The Hanged Man and Hermione as The Star. I really liked the spoiler card art for this issue, and it reminds me a lot of The Memory Thief.

And our final items – The Merciful Crow by Margaret Owen and matching neoprene pencil case! I adore the cover of this book and the story of a masked healer/killer is exactly the sort of thing I want on my self. This is one of those books I probably wouldn’t have bought given the choice, but I’m more than happy to have it anyway! So that’s it! Two mystery boxes down, two (ish) to go! Next month’s theme is Witches Be Crazy which of course I’m all about. I have a strong suspicion that I know what the book will be, though it’s not one I was looking at getting. Still excited for it! After that, we I have the special edition The Queen of Nothing box coming my way. I have been crazy obsessed with The Folk of the Air by Holly Black since I read it last year, and I had to have this box so badly that I did overtime to pay for it!!

Happy reading and I’ll see you next time!

I’m re branding. It’s a bit excited and a bit daunting! In the next few weeks I’ll be rolling out some changes in theme, name and content. Though it’s a bit daunting I’m really excited for the change – I hope you like it! I know I do 🙂