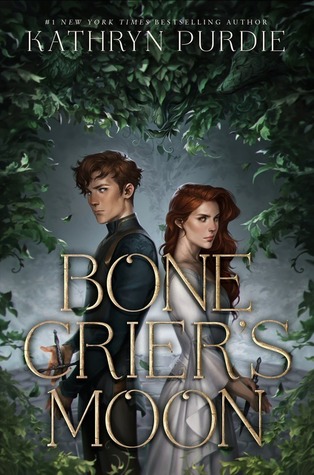 Told from the alternating perspectives of orphan Bastion and Bone Crier’s Sabine and Ailesse, the story is quick to start and quick to get you clued in on the strange and beautiful rituals of the strange and beautiful Criers. The all female tribe live in the ruins of an old castle in the forest and are all but a myth in the local city. I really enjoyed how Purdie balanced the mythos of the Criers against the reading seeing into the everyday practicality of their actions. It’s kind of hard to explain. Think about the troll under the bridge in The Three Billy Goats Gruff. There’s a terrible troll living under the bridge who eats goats. We’ve all heard stories about it and know to be wary of trolls under bridges. And with good reason. But what if the troll needs to eat those three goats to prevent an eldritch abomination from rising and destroying the world. Those goats seems like a small sacrifice now, don’t they? . I just really liked Purdie’s exploration of the legend surrounding these fearsome creatures and being able to see the reality of their lives. So good.

While there wasn’t a whole lot of diversity in the characters – for example the idea of a Bone Crier having a female amouré never comes up, which makes a bit of sense in context but was still a disappointing omission – I really enjoyed our cast of characters. I did struggle initially to distinguish between Ailesse and Sabine, and to a greater extent, the other Bone Criers who despite being named with identifiable features, just seemed to blend together at a point. Ailesse is devout, reckless and feisty. Sabine was questioning her destiny, very sensitive and extremely loyal. Bastion was a trash boy with trash friends and an amazing character arc.

I’m sure you’re aware by now where I stand on the enemies-to-lovers trope, and I do love a revenge tale and this had a bit of everything, and it played it well. Yes, the romance felt a little bit rushed and seemed to consist of languishing looks at each other over candlelight and lots of cheesy internal monologue to the effect of “No way are we soulmates but also she’s really hot and I feel a strange connection to her”, but it was a beautifully written cheesy insta-love so I can forgive Purdie for it.

The kingdom of dark woods, abandoned castles, and bone filled catacombs provide a suitably eerie stage upon which the story plays out. You can almost feel the chilling mist circling your ankles on the bridge and taste the silt in the flooded tunnels beneath the city. I hate to use the word atmospheric (what does that even mean, really?), but my goodness it was so atmospheric and so beautiful to experience.

Gosh, what a good book. I honestly don’t have anything but praise for it. Sure, it had a few easy enough to pick twists and turns, and sure it was a little slow to begin and yes it has one of the most punch-able characters of all time (Looking at you, Jules*) but overall it was such a well crafted and enchanting tale. I loved Ailesse, Sabine and the cruel and enchanting Bone Criers, and look forward to seeing how that ending (that ending!!!) resolves.

*I could honestly write a 200,000 word thesis on how much I loved/hated Jules. So complex! So hate-able! So I-can-totally-see-what-the-author-indented-but-I-hate-her-anyway! I just can’t wait for people to get their hands on this book to enjoy it as much as I did.